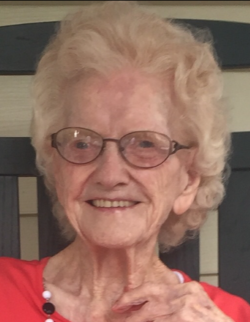 Mary was born in a little coal mining patch called Paul, PA on July 19, 1917, the fourth of ten children to John and Estella Orbin Ellenberger. She also had five half brothers and sisters. She grew up in the nearby coal mining town of Vanderbilt, PA and graduated from Dunbar Township High School, the first in first in her family to graduate. Mary loved and excelled in school and was selected for a position on the Dunbar High School girls basketball team and the girls swimming team.

Mary left Vanderbilt in 1937 when she married Glenn W. Boyd and moved to the Webster, PA area. Later they lived in Fellsburg, PA until the Donora Mill closed in the 1960s. Before moving to Coatesville, PA after the steel mills closed, Mary completed her LPN studies in Pittsburgh at night school. After moving to Coatesville she was selected for a position as Dental Assistant at the Coatesville Veterans Administration Hospital, a position she loved and held until she retired in 1980.

Upon retirement the Boyd’s returned to western PA and spent the next 20 years living in Connellsville in the summer and Florida in the winter. Mary and Glenn loved to travel, and their favorite trips were to the Holy Lands and to Great Britain to visit their daughter Sharon. They also made several trips to California to visit their son Glenn Jr. They talked about these trips for the rest of their lives.

After her beloved husband Glenn died in 2001, after 64 years of marriage, Mary began her volunteer work at age 84. For several years she worked for the former Ark Pregnancy Crisis Center in Belle Vernon and at Faith in Action in Charleroi. As her eyesight faded due to Macular Degeneration, at age 92 she was no longer able to drive and had to give up her volunteer work.

Mary was a devout Christian all her life. She gave of her time and resources to her church and to other Christian causes and to many people in need. She didn’t have a lot of financial assets, but she had much love and many talents and for 102 years she donated them all to her Lord.

Friends will be received on Friday from 2 to 4 and 6 to 8 p.m. in the James C. Stump Funeral Home Inc., 580 Circle Drive, Rostraver Township (724-929-7934) www.jamesstumpfuneralhome.com where a Funeral Service will be held on Saturday at 1:30 p.m. with Pastor Alan Petke, of the Gospel Alliance Church, officiating.  Interment will follow in Fells Cemetery.

To order memorial trees or send flowers to the family in memory of MARY PEARLE BOYD, please visit our flower store.