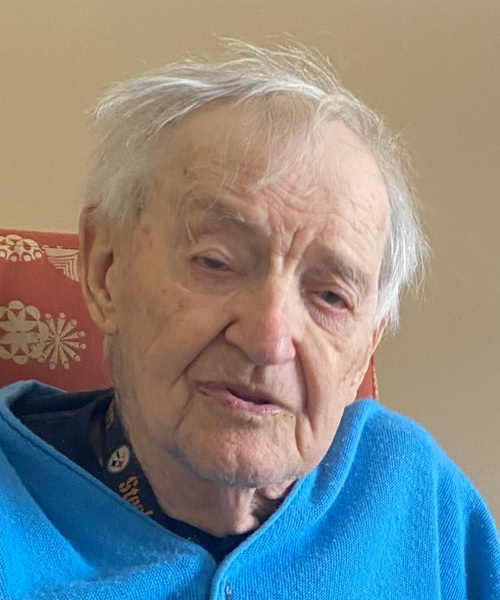 John Ziak Jr, 98, of Wickhaven, PA passed away peacefully surrounded by his loving family, Friday, March 11, 2022.  John was born November 21, 1923 in Bentleyville, PA.  A son of the late John and Katherine Ziak, he was the last surviving member of their family of 4 children.

He married the love of his life, Violet D. (Montgomery) Ziak, November 24, 1945, who passed away July 10, 2010, 4 months shy of their 65th anniversary.  He attended school in Perryopolis, Pa.  He served in the U.S. Army during World War II.  During his retirement years, he was an avid gardener, planted his vegetables yearly, enjoyed his flowers and trees, and nothing made him happier than picking his apples and cherries and making a fresh pie.  He enjoyed playing his harmonica and listening to music.  He enjoyed his family, especially his grandchildren and great grandchildren coming to visit.  He worked as a steelworker, realtor, and, the job he enjoyed the most, a traveling salesman selling Electrolux sweepers for 70 years.  During that time, he made numerous lifelong acquaintances that brought him much happiness.  If you had an Electrolux sweeper over the past 70 years, John probably sold it to you!

In addition to his wife and parents, he was preceded in death by his siblings; a brother, William Ziak and 2 sisters, Mary Stawovy and Elizabeth Ziak.

Interment was private.  A memorial service will be held at a later date.

We will miss our father’s laughter and numerous family stories.  We are grateful for his years of wisdom and appreciative that he has touched many lives over the years. Likewise, he was grateful for his family and many friends.

We want to thank the staff at New Haven Court at Lindwood and Bridges Hospice for their kindness, compassionate care and friendship.

Memorial donations in John’s memory can be made to www.bridgeshospice.org

To order memorial trees or send flowers to the family in memory of John Ziak Jr., please visit our flower store.
Send a Sympathy Card