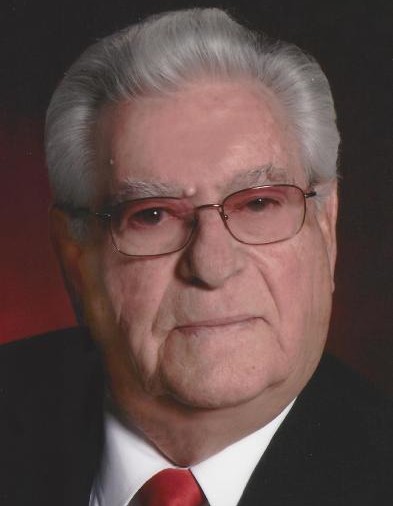 Joe was born and raised in Donora and lived in Spain as a child.  He attended Donora High School and immediately after graduating in 1947, he joined the U S Navy, serving in the Pacific post World War II.  Upon discharge he completed a business degree at Duffs Business College.  Joe worked 34 years for Mellon Bank as an Assistant Manager and Loan Officer until his retirement in 1984.  Joe met his wife Virginia, while both worked for Mellon, and they were married until her death in 2008.  He was a resident of Fellsburg for 61 years and was a member of Fells United Methodist Church.  Joe loved animals, enjoyed outdoor activities, including gardening, hunting, fishing and golf, to name a few.  He was a member of several service organizations including the Red Cross, Lions Club, Tri-County Lodge No. 252 F&AM Donora, Chamber of Commerce, Fells Church Methodist Men, and various golf leagues.

In addition to his parents, he was preceded in death by his wife of 56 years, Virginia Sehman Lopez; sister, Lola Burkhart; brother, Reggie Lopez.

Friends will be received on Wednesday from 2 to 4 and 6 to 8 p.m. in the James C. Stump Funeral Home Inc., 580 Circle Drive, Belle Vernon/Rostraver Township (724-929-7934) www.jamesstumpfuneralhome.com where a Funeral service will be held on Thursday at 11:00 a.m. with Pastor Bruce Merritt officiating.  Interment will follow in Fells Cemetery.

The Tri-County Lodge No. 252 F&AM will conduct a Masonic Funeral Service for Brother Lopez on Wednesday at 7:00 p.m. in the funeral home.

To order memorial trees or send flowers to the family in memory of Joseph Lopez, please visit our flower store.