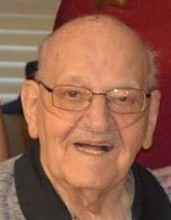 Paul worked in maintenance for Fort Pitt Steel, Westinghouse Air Brake and the Westmoreland County Courthouse.  He was a member of Faith Lutheran Church in West Newton, the VFW and the American Legion.  He was the oldest member of and was instrumental in organizing the Turkeytown Fire Department.  He served in the U.S. Army during the Korean War.

In addition to his parents, he was preceded in death by his brothers, Willard, Leonard and Donald Backstrom; and sister, Daryle Aspray.

Due to the COVID-19 Pandemic, private Funeral Services and interment will be held at the convenience of the family.

The family suggests memorial contributions to Wreaths Across America www.wreathsacrossamerica.org

To order memorial trees or send flowers to the family in memory of Paul Backstrom, please visit our flower store.