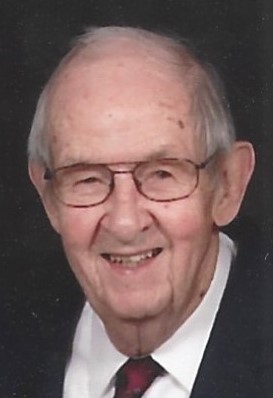 Warren J. Kraeuter, 97, of Rostraver Township, formerly of West Mifflin, died Saturday, August 28, 2021.  Born in West Mifflin on November 9, 1923, he was the son of the late Philip and Anna (Schurr) Kraeuter.

Warren was an office clerk for the Pennsylvania Railroad and Conrail, from which he retired. He was a member of the Church of St. Anne in Rostraver. He honorably served his country in the US Army Air Corps, where he was a pilot on a B24 Bomber in World War II.

In addition to his parents, he was preceded in death by four sisters and three brothers.

Friends will be received on Saturday from 10 to 11 a.m. in the James C. Stump Funeral Home Inc., 580 Circle Drive, Rostraver Township (724-929-7934) www.jamesstumpfuneralhome.com where a Blessing Service will be held at 11a.m. with Rev. James F. Bump officiating.  Interment, with Military Honors, will follow in Jefferson Memorial Park.

The family is recommending masks for those who are not vaccinated.

To order memorial trees or send flowers to the family in memory of Warren J. Kraeuter, please visit our flower store.