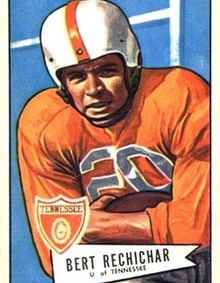 Bert was a 1948 graduate of Rostraver High School.  A talented football and baseball player, Bert was recruited by the University of Tennessee where he was an all-conference and all-american football player winning the National Championship in 1951 against the University of Maryland.  He was the 10th overall pick in the 1952 NFL Draft, where he was drafted by the Cleveland Browns.  He was traded in 1953 to the Baltimore Colts, where he kicked a record breaking 56 yard field goal and held the record until 1970.  While in Baltimore, Bert was a 2 time NFL Champion and 3 time Pro Bowl Selection.  Bert then played for the Pittsburgh Steelers in 1960 and finished his career in 1961 with the New York Titans.  Also, while at the Univeristy of Tennessee, he lead the Volunteers to a college world series in 1951 and played Professional Baseball for the Cleveland Indians Farm System.  He was inducted into the Mon Valley Hall of Fame in 2000.  After his retirement from the NFL, Bert was Rostraver Township Road Supervisor, a Bus Driver for BVA and Safety Manager for Donegal Construction.

In addition to his parents, he was preceded in death by his son, Bert Rechichar; great grandson, Presten Evans; brothers, Frank, Steve, Paul, Martin, John and Tom; and sisters, Mary Lux and Catherine Indof.

Friends will be received on Monday from 6 to 8 p.m. in the James C. Stump Funeral Home Inc., 580 Circle Drive, Rostraver Township (724-929-7934) www.jamesstumpfuneralhome.com where a Funeral Service will be held on Monday following visitation at 8 p.m.  Interment will be held privately at Olive Branch Cemetery.

To order memorial trees or send flowers to the family in memory of Albert D. "Bert" Rechichar, please visit our flower store.