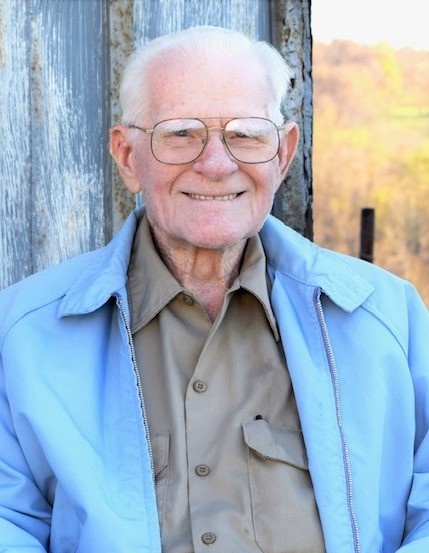 In addition to his parents, he was preceded in death by his beloved wife, Thelma Mae Nichols and son, Raymond A. ‘Joe’ Nichols; brothers, James R. Nichols and Norman R. Nichols; and sisters, Ida M. Hawker and Adell Hussar.

Emerson honorably served as a United States Army Medical Sergeant during World War II where he earned 2 Bronze Stars during his act of service.  He was a proud retiree of Monessen Plant of Wheeling Pittsburgh Steel where he was the Superintendent of the “Round House”.  He deeply enjoyed reminiscing with his family about his time in service as well as working on diesel locomotives. One of Emerson’s favorite pass times was going to Lusk, Wyoming to hunt mule deer and antelope.  He liked shooting targets with his grandchildren any chance he got; and especially, enjoyed spoiling them as well as his great grandchildren.

Emerson kept busy by working in his garage, riding his tractor and keeping his mind sharp with Word Search puzzles. He attended the Christian Missionary Alliance Church in Fayette City.

Friends and family will be received on Friday, February 14 th from 4 to 8 p.m. in the James C. Stump Funeral Home Inc., 580 Circle Drive, Rostraver Township (724-929-7934) www.jamesstumpfuneralhome.com where a Funeral Service will be held on Saturday at 10 a.m. with Pastor Paul Cope officiating.  Interment, with Military Honors, will follow in Belle Vernon Cemetery.

To order memorial trees or send flowers to the family in memory of Emerson F. Nichols, please visit our flower store.