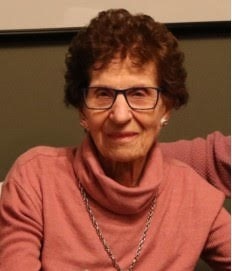 Helen R Estok, 98, passed away peacefully on January 9th at Paramount Senior Living in Bethel Park.  Helen was born on May 18 1921 the eighth of ten children and the last surviving sibling. In her 98 years on this earth she witnessed the inauguration of 17 presidents, appointment of 9 Popes and prayed over 5 different wars. She was preceded in death by her beloved husband of 60 years, George J. Estok; infant daughter, Marie Ann; her parents, Paul and Mary Ann (Tomecsko) Rechichar; seven brothers, Paul, Steve, John, Martin, Frank, Tom and Albert; two sisters, Mary Lux Fetkenhour and Katherine Indof; along with several nephews and a niece.

A lifelong resident of Rostraver Township she lived her life with a service to community and country, a strong faith in the lord, and an endless devotion to her family.

After graduation from Rostraver High School she earned a cosmetology license and began taking business classes.  Her professional plans were interrupted by world War ll, but as part of America`s Greatest Generation she answered the call of duty and supported the war effort assembling shells for the armed forces as a Rosie Riveter working at National Tube Company at Christie Park Works.  During the war she wrote to 52 men in the service including four brothers mailing care packages to all of them regularly.   She married George after the war and began working as a secretary at Rostraver High School and hustled as a server at the famous Twin Coaches Supper Club.  She was a member of the Rostraver Women`s Club and worked on many community fund raising drives.  In later years, she became active with the Rostraver Business Association and was honored by that organization in 2010 for her service to the community.  Additionally, she continued to practiced her patriotism as a founding member of the flight 93 memorial in Shanksville PA and supported several charities to help veterans.

Helen was active member of the Church of St. Anne, where she served as president of the Confraternity of Christian Mothers, President of Parish Council and as a Eucharistic Minister. She truly enjoyed working for the church and volunteered her time to help build a strong welcoming religious community.

But Her Greatest joy in life was caregiving and building a strong loving family.  Helen demonstrated unconditional love, concern and compassion for any family member who needed help or care. As a homemaker she was an excellent cook and baker pleasing her family especially on holidays with native Czechoslovakian "kolache," "pierogies" and "pagach".  She was always willing to lend a hand or an encouraging word of support.

She was an avid sports fan supporting the BVA leopards, Steelers, Pirates and Pens.  She especially enjoyed traveling with St Vincent College Alumni and her many family vacations that took her all over the world.  She was fortunate to enjoy the beaches of Taromina in Sicily, the Isle of Capri and the delicious food of Italy, the ruins of Greece, the music of Mexico, the history of our nation’s capital, the excitement of Las Vegas, the lights of Broadway, the sunsets of Arizona and the islands of Hawaii.

She is survived by her daughters Mary Ann and Marcy Estok who had the honor and privilege of caregiving for her over the past several years.  In addition to her daughters, she was loved by many nieces, nephews, friends and the staff and residents of Paramount who became our extended family.

Friends will be received on Monday from 2 to 4 and 6 to 8 p.m. in the James C. Stump Funeral Home Inc., 580 Circle Drive, Rostraver Township (724-929-7934) www.jamesstumpfuneralhome.com where a Blessing Service will be held on Tuesday at 9:30 a.m., followed by a Funeral Mass at 10 a.m. in the Church of St. Anne, with her nephew, Rev.  Edward T. Estok, Pastor of St. Albert the Great Parish in North Royalton, Ohio and Rev. David J. Nazimek concelebrating.  Interment will follow in West Newton Cemetery.

To order memorial trees or send flowers to the family in memory of Helen R. Estok, please visit our flower store.