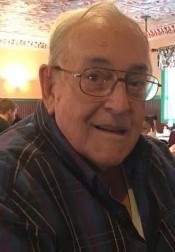 Albert Kenneth Byers, 92, of Dunlevy, died Wednesday, August 3, 2022 at his home surrounded by his loving family.  Born in Rostraver Township on January 21, 1930, he was the son of the late Albert and Violet E. (Waddington) Byers.

Kenny was a heavy equipment operator for Heckett Engineering and was an active member of Little Redstone United Methodist Church.

In addition to his parents, he was preceded in death by his wife, Carol Byers; brother-in-law, Harry Fleming; and son-in-law, Clyde Hefner.

Friends will be received on Sunday from 2 to 4 and 6 to 8 p.m. in the James C. Stump Funeral Home Inc., 580 Circle Drive, Rostraver Township (724-929-7934) www.jamesstumpfuneralhome.com where a Funeral Service will be held on Monday at 11 a.m. with Pastor Jack Washabaugh officiating.  Interment will follow in Belle Vernon Cemetery.

To order memorial trees or send flowers to the family in memory of Albert Kenneth Byers, please visit our flower store.