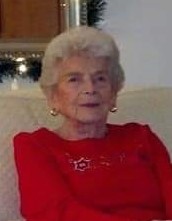 Betty Olive Churchman Pinter Neff, 100, of Rostraver Township, died Tuesday, February 23, 2021 in Riverside Nursing Home in McKeesport. Born in McKeesport on March 10, 1920, she was the daughter of the late Harvey and Bessie (Dom) Churchman. Betty was a former resident of Sutersville, but she was born and raised in the Highland Grove area of McKeesport.

Throughout her life, Betty worked several different jobs, including the counter at Vienna Bakery in McKeesport, Jaison’s Department Store in McKeesport as well as an assembly line worker at Westinghouse Electrical & Manufacturing in East Pittsburgh.

She is also survived by her sister, Lois Mann Phippen; as well as many, many nieces and nephews in the Hyde, Mann, Newton, Betz, Caldwell, Churchman, Roberts, O’Brien and Moffat families.

She faithfully attended Highland Grove United Methodist Church most of her life and she often reminisced about living in “the castle” in Highland Grove and would tell stories of life there as a child, including roller skating through the halls.

She will be greatly missed!

To order memorial trees or send flowers to the family in memory of Betty Olive Pinter Neff, please visit our flower store.