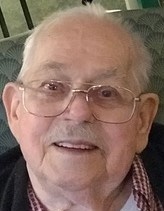 Clyde F. Weaver, 90, of Hunker, formerly of North Charleroi, went home to be with his Savior on Friday, August 23, 2019.  Born in North Charleroi on February 10, 1929, he was the son of the late Charles and Helen (Matheys) Weaver.

A 1947 graduate of Charleroi Area High School, Clyde served in the US Navy from 1947 to 1950.  After his service, he owned his own appliance store in Monongahela before his employment at Clairton US Steel where he worked as a Foreman in electronics for over 30 years.  As a young adult, he professed his faith in Jesus Christ and was a member of the Smithton Nazarene Church.  He was very active in his church and served as a board member for several years.  Clyde was known for being a huge Steeler fan and avid coffee drinker and also enjoyed hunting with his sons and spending time with his loved ones.

The family would like to give a special thank you to the entire team at Easy Living Country Estates Assisted Living Home, Medi Home Health, and Hospice for their endless hours of compassion and dedicated care over the past 8 years.

Friends will be received on Sunday, August 25 from 2 to 8 p.m. in the James C. Stump Funeral Home Inc., 580 Circle Drive, Rostraver Township (724-929-7934) www.jamesstumpfuneralhome.com where a Funeral Service will be held on Monday, August 26 at 10 a.m. with Pastor Mark Wagner, Pastor of the Hannahstown Road Baptist Church in Cabot PA, officiating.  Interment will follow in Mon Valley Memorial Park.

To order memorial trees or send flowers to the family in memory of Clyde F. Weaver, please visit our flower store.