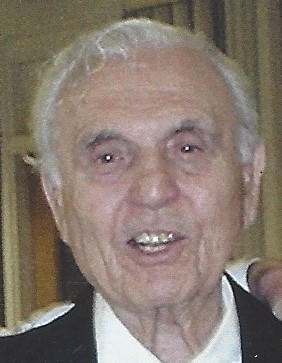 The Kerr family moved to New Kensington, where Jack attended St. Joseph School and graduated for Ken Hi in 1941.  His family then moved to Monessen, where he was employed at the Monessen Daily Independent.  After Pearl Harbor, he joined the PA Reserve Defense Corp and was called into federal service.  After basic training at Camp Wheeler, GA, he stayed there as a cadet instructor.  Jack volunteered for the 10th Mountain Division Ski Troops and was assigned to Camp Hale, CO for Mountain Training.  He was selected for Infantry Officer School at Fort Benning, GA.  After being commissioned, he served on Battle Courses at several camps, then overseas on Morothi in the South Pacific, the Philippines and Okinawa, reaching the rank of Captain.  He attended Penn State and California Teachers College after his service and was appointed Mechanical Superintendent at the Valley Independent.  He was a founder of the Monessen Midget Football League serving as president and coach and was also a member of the Monessen Ravens Semi-Pro Football Team that won the Steel Valley Championship in 1948.  He was past member of Hilltop Fire CO and was a first aid instructor.  Jack helped found the Holy Cross Church in Webster and directed the first choir at their first Midnight Mass and contributed at the Webster Fire Hall.  He was a member of Thomas McKee Post 28 American Legion and the Belle Vernon VFW.  He was also a 4th Degree Knight in the K of C and was a member of the Monessen Council No 954.  He was active in the Church of St. Anne, serving as a Lector, Eucharistic Minister, CCD Catechist, and sang in the church choir.    He served in the U.S. Army during World War II.

He is survived by his wife of 70 years, Rose Marie Yost Kerr, who he married on July 3, 1948; son, John Kerr (Lee Fleming) of Mobile, AL; daughter, Kimberly Kerr Gilbert (John Kavulick) of Rostraver Township; and numerous nieces and nephews.

In addition to his parents, he was preceded in death by his brother, Edward, who served with the PA State Police for 28 years; and sister Mary Rose "Bebe" Armstrong.

Friends will be received on Monday from 6 to 8 p.m. and Tuesday from 2 to 4 and 6 to 8 p.m. in the James C. Stump Funeral Home Inc., 580 Circle Drive, Rostraver Township (724-929-7934) www.jamesstumpfuneralhome.com where a Blessing Service will be held on Wednesday at 9:30 a.m. followed by a Funeral Mass at 10 a.m. in the Church of St. Anne, Rostraver Township, with Rev. Vincent J. Gigliotti presiding.  Interment, with Military Honors, will follow in Belle Vernon Cemetery.

The Thomas McKee Post 28 American Legion will conduct a service on Tuesday at 6:30 p.m. in the funeral home followed by a service conducted by the K of C Monessen Council No 954.

To order memorial trees or send flowers to the family in memory of John F. "Jack"" Kerr, please visit our flower store.