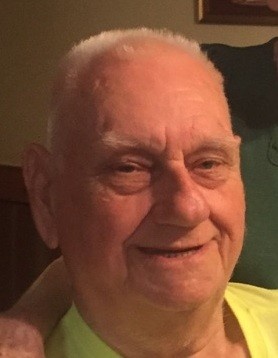 Ralph Louis Hufford, 85, of Rostraver Township, died Thursday, May 10, 2018 in Allegheny General Hospital.  Born in Greenock on November 1, 1932, he was the son of the late George L. and Marybelle (Logue) Hufford.

Ralph was a hot metal craneman for U S Steel Duquesne works for 32 years and then was a nurse support aide at Jefferson Hospital.  He was a member of St. Sebastian Church and served in the U.S. Army.  He loved to tinker, work on cars and liked to play cards.  He also loved taking pictures/videos and spending time with his family.

In addition to his parents, he was preceded in death by his grandson, Chad E. Angelo; brother, Ronald Ross Hufford; and sister, Belle Elizabeth Hufford Puckey.

Family and friends will be received on Sunday from 2 to 4 and 6 to 8 p.m. in the James C. Stump Funeral Home Inc., 580 Circle Drive, Rostraver Township (724-929-7934) www.jamesstumpfuneralhome.com where a Blessing Service will be held on Monday at 9:15 a.m. followed by a Funeral Mass at 10:00 a.m. in St. Sebastian Church with Rev. James F. Bump as celebrant.  Interment will follow in Round Hill Cemetery.

To order memorial trees or send flowers to the family in memory of Ralph Louis Hufford, please visit our flower store.