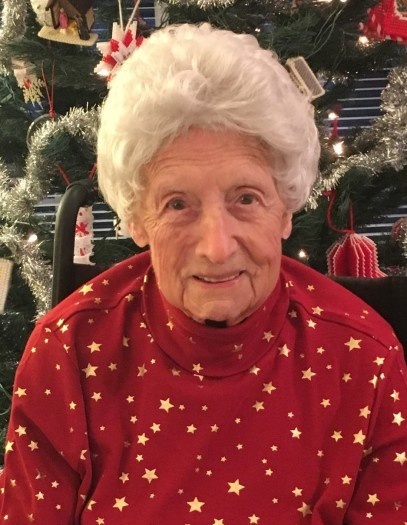 Vivian Blanche (Hickey) Blick, 99, passed away peacefully in her Greensburg home on February 17, 2019.  Born in Charleroi on July 14, 1919, she was the daughter of the late William James and Mattie Gertrude (Rodgers Davenport) Hickey of Speers.

Vivian married her loving husband, Herman, on June 19, 1940 and moved to Webster, PA where she lived for 55 years.  First and foremost, Vivian was a homemaker and in her own words, "tried to be a good wife and loving mother" who was devoted to her family.  Vivian was a member of the Trinity Evangelical Lutheran Church in Donora for 66 years until it closed in 2006; she then joined the West Newton United Presbyterian Church, where she was a member of the United Circle.  She was a founding member and president of the Women's Auxiliary of the Webster Fire Department.  She was also a member of the Rostraver Homemakers' Club for many years.  After moving to Redmont Village in Greensburg in 1995, Vivian served as the Activities Chairperson for the condo association for 15 years.

In addition to her parents, she was preceded in death by her husband, Herman Blick in 1989; and brothers, Thomas and William Hickey.

Friends will be received on Wednesday from 3 to 7 p.m. in the James C. Stump Funeral Home Inc., 580 Circle Drive, Rostraver Township (724-929-7934) www.jamesstumpfuneralhome.com where a Funeral Service will be held on Thursday at 11 a.m. with Rev. John Manon officiating.  Interment will follow in Belle Vernon Cemetery.

To order memorial trees or send flowers to the family in memory of Vivian Blanche Blick, please visit our flower store.